Non-race events that the club is running.

There were three in the crew: Daren, Wilko aka Father Brian on a 350 who's the smoothest rider I've seen, and me.

We had a chilly start to the morning leaving Erica, even after letting it warm up a bit while we ate our bacon and eggs ???? breakfast at the 1914 cafe. But it wasn't chilly for long as DARREN had us working from the get go. New knobbies (for some) kept the red mud under control and gave us big smiles as we power-slid out of damp leafy turns ????.

A short section of "are you sure there's a track there?" hand cut got the heart pumping as we negotiated fallen trees and steep banks. After a quick latte ☕ at Walhalla the forestry conditions turned more open and rocky as we ascended mountains that seemed to go on forever (stegz are awesome!) then descended again down some of the steepest tracks I have ridden (better replace the brake fluid) ????.

The ride along deep creek no. 1 was pretty special, as was descending the switchbacks of Trig track, wondering how we would get out again. A DARREN-special bit (nudge nudge, ????????) sent us down plane track which was so steep even Wilko stopped at one point to suss out an approach.

Unfortunately after plane track, on the slow, flat, gravel, car park access road Wilko had a momentary lapse in a corner and ended up in a ditch. A broken collarbone meant the end of his ride and he took the main road back to the car.

DARREN and I pressed on. A bike swap was done: I believe DARREN was most impressed with the recent suspension work on the WR, and I of course blown away with the any-gear any-time on-tap power of the 500. Wow.????

The ride was billed as a "tank of gas" ride and that was pretty much spot on. About 2km out of town the 500 rolled to a stop on the side of the main road into Erica. ⛽ 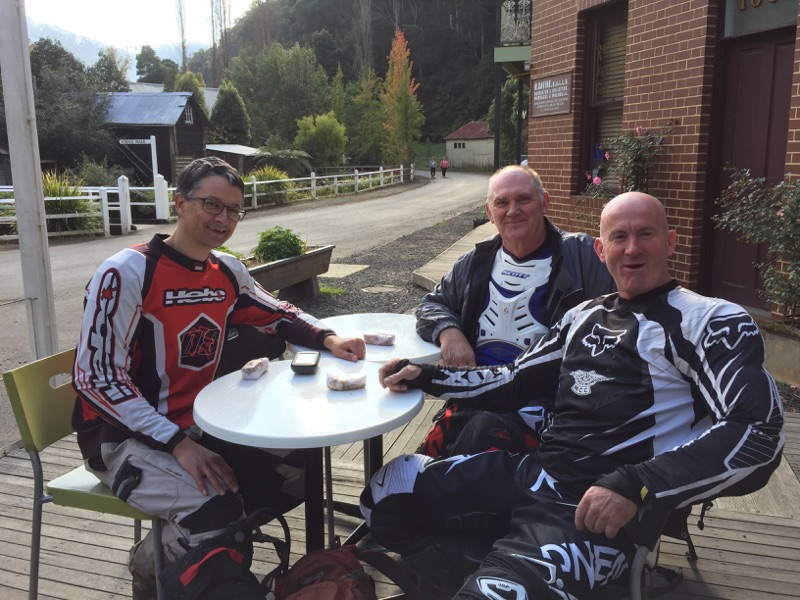 While we were transferring some fuel from the WR refuelling tanker, the local boys in blue turned up. I'm now thinking maybe I should've got a DOT tyre, but all they wanted was a chat and to hand out a bike safety brochure.

We finished the day with a couple of frothies ???? at the pub while DARREN chatted to all the locals.

Scooter News report on Off-road Clubchamps Round 6 at

Click on link to download the Scooter News report on the Off-road Clubchamps Round 6 held at Krusic's Park on the 10th August.

Challenge is calling on dirt bike riders to register for the 2013 KTM Ride4Kids, the biggest charity motocross event in the country which raises funds for Challenge, an organisation that supports children living with cancer and their families.

Held Sunday 20th October 2013 at the Dandenong Motorcycle Club in Wonthaggi, Ride4Kids is a full day of non-competitive riding where participants can ride in Motocross and Enduro events. All sessions are an open practice format with no actual racing so people of all ages and abilities can get involved. A pee-wee track is also available for first time riders.


In addition to an entry fee to ride, participants are encouraged to raise money for Challenge by asking friends and family to sponsor them or make a donation. Riders can also set up an online fundraising page at http://www.everydayhero.com.au/event/ride4kids2013.

ORCC R3 - Micah’s property (Rawson)
What a great day, with perfect weather and track with 6 runs on an 8-10 min loop.

The PW and 50’s had their own track, so everyone had lots of riding on the day.

Big thanks to the crew who helped set out the track on Sat especially Andrew Lambie with help from Citty (Brian Dallow) for laying out the track.

As you would be aware by now, Dandenong Motorcycle Club is holding a MotorSafe/Minikhana Come n Try Day on Saturday 23rd March, and on behalf of the MotorSafe Program and Motorcycling Victoria we would like to confirm your attendance!

In the morning you will fill out your forms to receive your Free Mini Licence which will entitle you to 12 months recreational riding free! Following on from that, kids will go through a MotorSafe Presentation, which will cover off a number of safety items, then straight into Minikhana and riding activities! Please see below running program for the day.